We lost many heroes this week. Adel Termos, the hero of Beirut, and Jonah Lomu, the hero of New Zealand are two that stand out most to me. That is not to cheapen the lives of the others, it’s just the way it is.

You might ask in disgust: ‘How could you possibly compare the two?’ Well, one can only do the best with the circumstances they encounter in life, and both men seemed to do relatively well with the hands they were dealt. I would write an article about Adel, but I know nothing of the man apart from his final moments, and this is, primarily, a sports website – so it would be out of place.

The front page of the Irish Examiner summed up Lomu’s death far better than my words ever can: 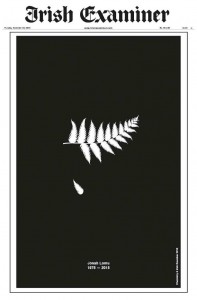 We all know of his amazing feats on the field. His steamrolling of Mike Catt in ’95 is the stuff of legend and it was only after his death I realised he was only 19 at the time. Incredible.

His final minute try against the Wallabies in THAT test is still burned clearly into my mind. When he got the ball at the end, even though he still had three men to get around, I knew we were beat. He was simply THAT good.

What Lomu really taught me as a young man, however, is that one could be both brilliant and unassuming. Aggressive yet passive. I never heard Jonah Lomu say how good Jonah Lomu was. The peacock poise and endless Instagram posts that seem part and parcel of being a professional athlete these days do not sit comfortably with me, and I doubt they would have with him either. Although, I imagine, with a disarming smile and shrug of his huge shoulders he would pass no judgement on those who indeed embrace it.

Perhaps the closest he came to outright arrogance was the impossible skill level he bestowed on himself in the greatest video game ever made*, Jonah Lomu Rugby, but that probably had more to do with the game developers, and to be fair, wasn’t too far off reality as it were.

They say one death is a tragedy and one hundred a statistic. If you asked the families of the hundred lost, however, I daresay they’d disagree. I must admit it feels strange to mourn one man I didn’t know personally in a time when turning on the news and seeing mass death has become the norm.

But whatever the ‘tragedy hipsters’ may say – those people hellbent on telling us for whom and how we should mourn – I will still mourn the great man.

I am tempted to start a campaign where people change their profile pictures to Lomu, just to see the outrage it provokes. ‘How dare you mourn an athlete when people are being murdered in Libya/Syria/Paris/Everywhere.’ Well, I can mourn whomever and however I please, as can you. It is not an easy thing to process grief in any instance, how dare you tell me what is appropriate? If I want to change my profile picture to a French flag, I will fucking do it (I didn’t, but that’s not the point).

So I grieve for all lost in the past week, including Jonah Lomu.

There have been so many great anecdotes and lines spoken about Mr. Lomu during the week, but my favourite so far is: “The game they play in heaven just got a lot tougher.”

* There is no disputing this.