Kevin Durant has agreed to join the Golden State Warriors. It seemed absurd that this could even happen, but the rumours were indeed true after all.

There will be a plethora of hot takes on Durant’s move over the coming days, now that he’s made his decision to leave the Oklahoma City Thunder in what Forbes has already described as a “smart business/basketball decision.”

Here’s the thing: Durant could have taken a one-year extension and stayed at Oklahoma, a team that came ridiculously close to edging out the Warriors in the Western Conference Finals. Make no mistake: OKC was a genuine title contender. They made a three-man trade for the declining Serge Ibaka that many viewed as a good net win. They just had to convince Kevin Durant to stay the course and stick things out. And they couldn’t even do that. How is it even possible?

Well, here’s the thing. Durant is being driven by a thing called “legacy”.

The dictionary definition of “legacy” is quite modest, in that it basically refers to a) something (such as property or money) that is received from somebody who has died; b) something that happened in the past or that comes from someone in the past. However, when viewed as a social construct, the importance of “legacy” suddenly makes a lot more sense.

“Legacy” is something that is usually, but not always, viewed after-the-fact. US President Barack Obama is currently in his own legacy-burnishing years, hyper-aware that every decision he has made will be framed within the context of how it will look to historians 50 years down the track. He’s got plenty of rings to his name: Obamacare, the Paris Climate Deal, ordering the raid that killed Bin Laden, etc. In politics, one must collect as many “rings” as possible, and deflect to these throughout the remainder of your life whenever questioned about your tenure (Howard, J, on gun control, etc).

High-profile athletes take a similar stance in regards to the importance of legacy. We are in a fast-moving social media world, where people can air their unfiltered thoughts via smartphones and have that message communicated globally.

Everyone has an opinion on who the Greatest of All Time (GOAT) is, whether we’re offering a POTUS power ranking, or picking our top five point guards. It’s the easiest thing to do. So you think that Michael Jordan is the greatest athlete of all time? Why not Bradman, who statistically was a more dominant player in his chosen sport? And so on and so forth. It’s silly and unscientific, but nonetheless enjoyable.

On Bradman, it’s difficult to imagine he was conscious of the legacy he would be leaving in 1948, when he was dismissed for a duck in his final test. But then again, perhaps he was thinking about it, after all? An average of 99.94 has a certain symmetry and assonance to it, and perhaps the Don knew, even then, that this imperfect yet pure number would secure his legacy forever.

That said, the idea of “legacy” does seem to be a distinctly 21st Century phenomenon. It has coincided with the uber-professionalism of sport (i.e. money) and the ubiquity of social media. Players make official written statements when they leave their club to justify the move in terms of their career, and to keep themselves from appearing the villain.

Kevin Durant released a statement on the Players Tribune website entitled ‘My Next Chapter’. In a bid to get on the front foot and control the message, he gave the following explanation for his decision.

“The primary mandate I had for myself in making this decision was to have it based on the potential for my growth as a player — as that has always steered me in the right direction. But I am also at a point in my life where it is of equal importance to find an opportunity that encourages my evolution as a man: moving out of my comfort zone to a new city and community which offers the greatest potential for my contribution and personal growth. With this in mind, I have decided that I am going to join the Golden State Warriors.” 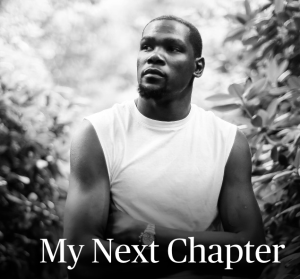 Durant’s effort to categorise this move as not just a career decision but one based on “personal growth” and “my evolution as a man” is a commendable attempt to spin this in a positive fashion. Of course, this is corporate comms 101. He can’t exactly come out and say “I don’t think I can win at Oklahoma with this current roster. My best chance is to go to the best team in the Western Conference and win titles there. If you can’t beat ‘em, join ‘em.” Even though this is obviously the reason for his departure, he cannot actually say that. We’re not quite ready to hear that, yet.

It’s perhaps unfair that Durant has always been lumped alongside “one-club men” like Dirk Nowitzki, Tim Duncan, Larry Bird and Magic Johnson, as someone who would play out their career for the team that drafted them. But it’s worth noting that all those players managed to win a championship. It’s this fear of missing out that has driven Durant to make the move to the Bay Area. What’s the point of being a “one-club man” if you can’t win a ring there, in a world where rings mean literally everything?

Like Obama, we see in Durant what we wanted to see. Durant was a friendly, polite young man with bucket-loads of integrity. But based on events somewhat out of his control, Durant has made a difficult decision based on realist principles (i.e. the relentless pursuit of championship rings), which will ultimately shape the way he is viewed both today and after his career is over. In short, the ruthless world of modern professional sport is no place for an idealist.

The fans and media cannot fault Durant for taking this opportunity even if it clashes with their desired perception of him as a loyal franchise player, for it’s the fans and media themselves who have forced players to carefully consider their legacies. The word “legacy” is a socially constructed idea that is influencing athletes to consider their careers in binary terms. If Durant doesn’t win a ring at the Warriors, he will be considered one of the great failures.